This post may contain affiliate links, which gives me a small percentage of the sale, at no cost to you.
Home » DIY & Tutorials » DIY » Living Room Chairs {Worst DIY Project EVER!}

A year ago, almost to the day, I posted about the chairs in our living room that I was planning on reupholstering.
These chairs. That were free. 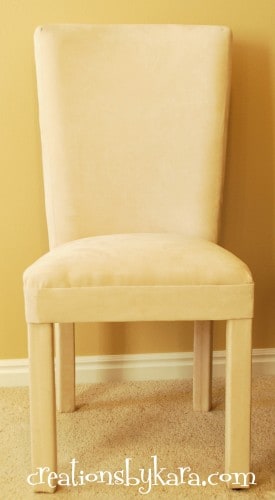 Six months later- in August to be exact, I posted about what a nightmare my chair makeover was turning out to be.
Seriously, this has been the worst DIY project I have ever tackled.
It makes my desk refinishing project look like a cake walk.

EVERYTHING went wrong. The slipcover pattern I bought didn’t fit the back of the chairs.
So with the help of my mom, we made a new pattern out of some old sheets.
Tweaked it like 5 times till it fit perfectly.
Cut out the chair fabric, sewed it together, then realized that the stinking sheet material had stretched.
The slipcover didn’t fit.

Cussing, crying, and a bucketload of seam-ripping.

Sewed the whole thing together again.
Still didn’t fit right and the pleats would NOT work.
I took the slipcover off and made sewing adjustments at least a dozen times.
Even tried hand sewing them together in spots. No success.
By this time I was ready to throw the dang chairs through the window.
So I decided to set them aside and work on something else.

Fast forward about three months.
I pulled the chairs out and started again. After a few hours of tedious work I realized that there was no way on earth I could sew these slipcovers together and make them work.
So I did what any crafter would do.
I pulled out my hot glue gun.
Yes I did.
And after pulling, tucking, and gluing, I managed to hide all the raw edges.
But the pleats still wouldn’t lie flat and looked plain awful.
By this time all I wanted to do was spit on the stupid chairs. It was like the dumb things were mocking me.
So to get back at them I just left them with the pleats looking wonky. Served them right!

This week I decided it was time to either finish the chairs (or set fire to them), so I tackled them again.
Took an iron to them-with the slipcovers still on because they’re glued in place.
And I hot glued the pleats so they would lie flat. Bwaahahaha. Take that you dumb chairs!

So now my chairs are finally finished. And they were such a pain in the hiney that I don’t even like them anymore.
But I’m hoping that I will be able to forgive and forget and grow to love them.

Want to see the little spawns of Satan? Here’s one of them: 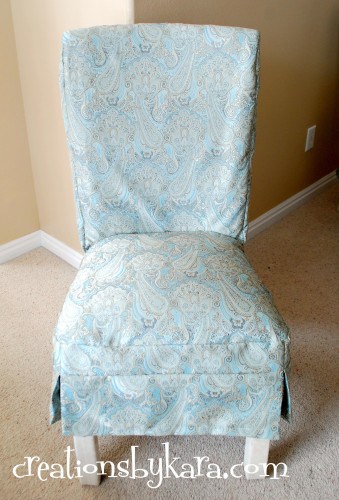 I figure that each chair took me over 20 hours. So if I had been making minimum wage, I would have earned at least $290. And the fabric was 60 bucks. So that’s $350. Holey crap.
I think next time I’ll just buy some stinkin’ chairs!!

Have you ever had a DIY project take so darn long that by the time you finished you wished you’d never started? I sure hope I’m not the only one.