This post may contain affiliate links, which gives me a small percentage of the sale, at no cost to you.
You are here: Home / DIY / Sometimes DIY Projects Can Be a Headache!!

I am participating in a sponsored campaign hosted by Advil®. I received compensation for this post. All opinions stated are my own.

My oldest son has been serving an LDS mission in Chile for the past two years. He’s coming home this week, and I really wanted to have his bedroom all finished when he got back. But sometimes things just don’t go the way I plan. Actually a lot of times things don’t go the way I plan. Let me explain. See, we had to clean out my husband’s old office to make room for a bedroom. It’s been the dumping ground for the last several months, so just getting it emptied out was a monumental task. But after one trip to the dump and several trips to the thrift store, we got it done. That was just the beginning of the headache. 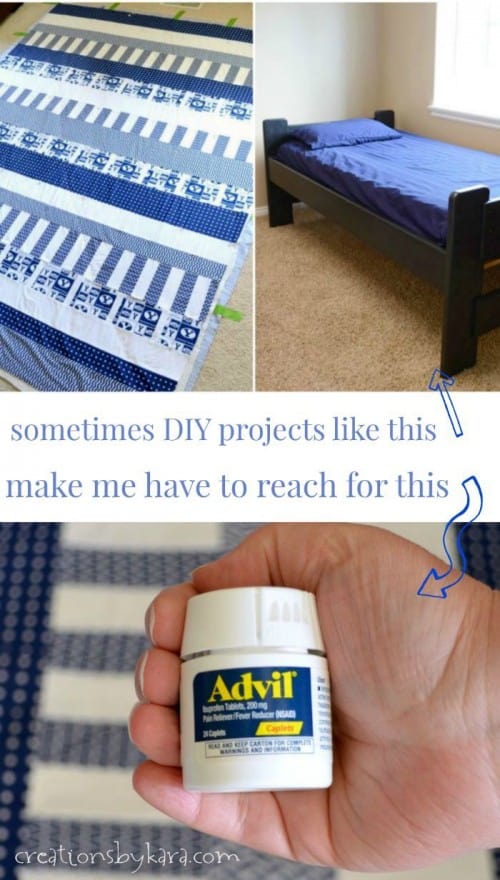 Next up he needed a bed. We removed the top bunk from my youngest son’s bed a few months ago, so I decided to paint it and transform it into a regular twin bed. I planned on painting it outside, but the weather didn’t cooperate, so I ended up having to sand and paint it right in the bedroom. The sanding was kind of a pain, and I had to vacuum up a lot of dust! But as you can see, it looks much better after a new coat of paint. Hooray for paint. 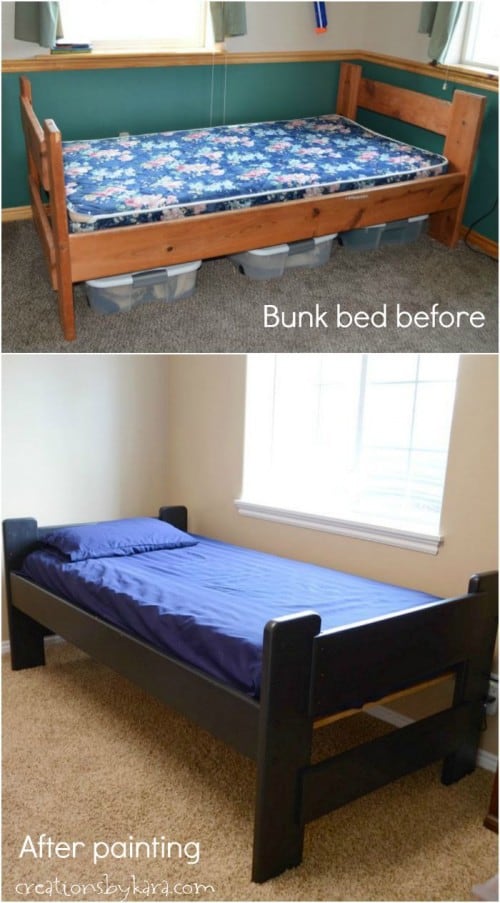 No bed is complete without a quilt, so I decided to make a quilt for his bed. I went with a simple strip quilt because those are supposed to be easy. But then some of the fabric had a pattern that couldn’t be turned lengthwise, so I ended up having to piece some of the strips together. Then I ran out of white fabric and had to run back to the fabric store. My mom came down to help me, and we were measuring, cutting, and sewing all day. And doing laundry and cleaning house in addition. Because I am a crazy obsessed person.

By afternoon, we were exhausted. But we wanted to get it finished, so we started figuring out how to piece together the backing fabric. Oh my laws. We were both so tired we couldn’t do simple math. My head started hurting. Because math and I don’t get along. Like at all. I think we reconfigured it half a dozen times. . And we could NOT get it right. After an hour (no joke), we finally figured out our mistake, and were able to get the fabric cut and sewn together.

Then came the f hard part. Trying to get the darn thing pinned together. I didn’t have floor space big enough to spread the quilt on, so we tried to do it on the table. Epic fail. After another hour of stretching, pinning, cutting, and swearing, the whole thing still had wrinkles all over it. And it was time for my parents to head home. 🙁

By the end of dinner, my head really hurt. (I’m pretty sure it was from all that math.) So I grabbed  Advil®, and crashed on the couch until I felt like a person again.

I realized that if I moved some furniture out of the living room, I would probably have room to spread out the quilt on the floor. Got it spread out with the help of my husband and sons. Tried using spray adhesive to baste the quilt together. Didn’t work. So I used the old fashioned method of pinning and basting. Took over an hour, but I got it done. . .

And realized the walking foot for my sewing machine is missing. Can’t find it anywhere. So I have to replace it before I can continue. This is the current state of my son’s quilt: 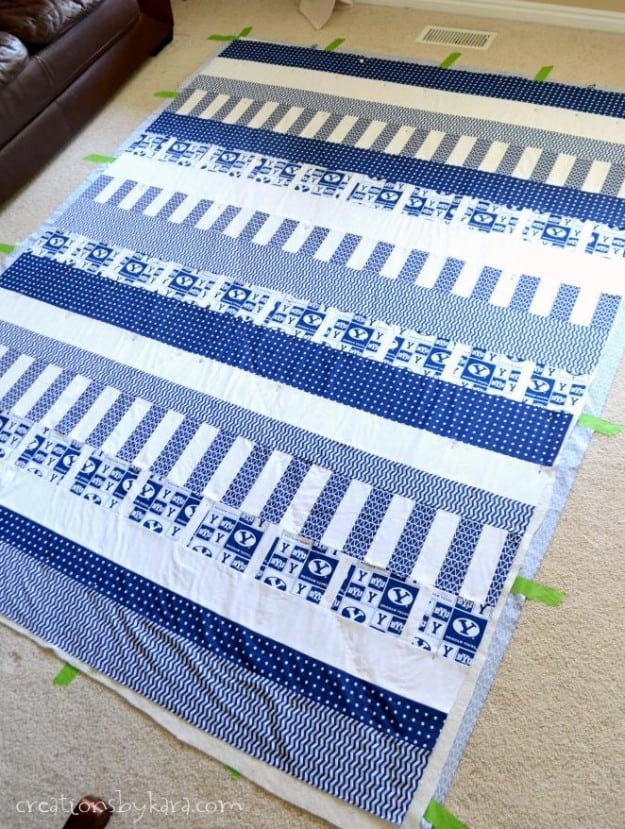 And because I’ve spent so much time trying to get the quilt finished, the nightstand is still sitting on the deck all sad and lonely, waiting for its new coat of paint. After it gets a bath. Sigh. 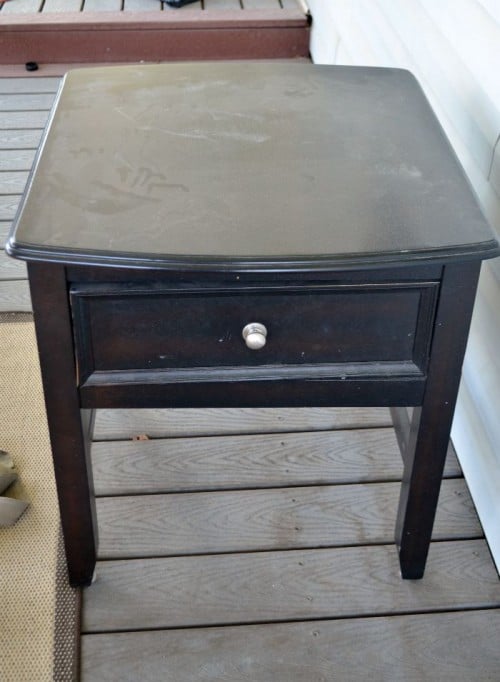 Stay tuned for the completed project. I am bound and determined to get this quilt on the bed!!

Are you tackling any DIY projects that are a pain? How would you like to be compensated for your efforts? 🙂

This summer Home improvement expert Carter Oosterhouse is teaming up with Advil® to help DIYers tackle their toughest  projects.

Upload photos of your DIY project to Twitter or Instagram from now until September 7th using both hashtags #DIYrelief and #AdvilSweepstakes for a chance to win daily prizes.

A grand prize winner will be drawn from all entries. The winner will get a video conference call with Carter, where he’ll help plan a DIY project for your home as well as $15,000 CASH to use toward a tough DIY project.

Now go enter. Maybe you’ll get lucky and get a little gain for your pain. 😉

Previous Post: « Coconut Chocolate Chip Scones
Next Post: The DIY Bed Makeover That Nearly Did Me In »