This post may contain affiliate links, which gives me a small percentage of the sale, at no cost to you.
Home » Recipe Index » Main Dish: Chicken » Chicken Cordon Bleu

I am a little embarrassed to admit this, but I had never made Chicken Cordon Bleu for my family before. I love Chicken Cordon Bleu. But it always seemed like too much work. Then I saw a tip from Melanie at Mel’s Kitchen Cafe. Instead of pounding out the chicken breast, rolling it up, and securing with toothpicks, she uses a much easier method. Just take a knife and split the breast in half horizontally, leaving the edge intact. Fold it open, add the meat and cheese, and fold it closed.
Oh my gosh. So easy. And the cheese actually stayed in the middle instead of leaking out all over the pan. I will be making Chicken Cordon Bleu this way from now on! I also tried Melanie’s recipe for sauce, and it was delicious. So much better than the cream of chicken soup variety. Don’t be afraid to give it a try! 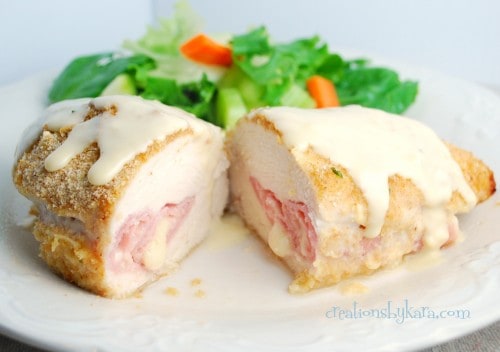 4 large chicken breast
4 slices deli ham
4 slices swiss cheese
1/4 cup flour
1 egg, beaten
1/2 cup seasoned bread crumbs
2 Tbsp finely shredded Parmesan cheese
1/4 tsp garlic salt
Place the flour in one shallow bowl, the beaten egg in another, and the bread crumbs, parmesan, and salt in another. Make a pocket in the chicken breasts by cutting them in half lengthwise almost all the way through. Leave one side intact. Place a piece of cheese on a slice of ham and roll up. Stuff into the chicken “pocket”. Secure with toothpicks if necessary. Dip chicken into the flour, then into the egg, then into the crumb mixture. Place in a greased 9×13″ pan. Repeat with remaining chicken, ham, and cheese.
Bake on bottom oven rack at 450° for about 10 minutes. Lower temperature to 400° and bake for 25-30 more minutes or until chicken is done.