This post may contain affiliate links, which gives me a small percentage of the sale, at no cost to you.
Home » Recipe Index » Crock Pot BBQ Pork Ribs

Crock Pot BBQ Pork Ribs- Unlike most crock pot pork chops, these ribs actually end up with a thick and flavorful sauce. They practically melt in your mouth!

Judging from the popularity of my Ranch Crock Pot Pork Chops, you guys love a good crock pot recipe! Truth be told, I don’t cook with my crock pot nearly enough. Not because I don’t love it, because I do. Simply because even though I have a weekly menu, I have a hard time remembering about dinner while it is still breakfast time. So even when I plan for crock pot meals, I often forget to throw them in. Usually at about 2 or 3 in the afternoon, I remember. But by then it’s too late, so I have to scratch the crock pot meal come up with a new idea. Sheesh! 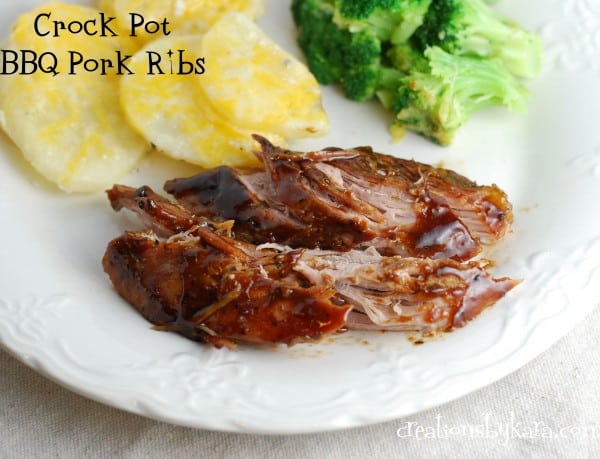 Crock pot cooking really can be handy, and I’m hoping to rely on my crock pot more often this coming year. This BBQ rib recipe will definitely be making the rounds a few times. I don’t always have success with BBQ in the crock pot, because it seems like I always end up with watery sauce. This recipe is unconventional, but it left us with a nice and thick BBQ sauce at the end. The secret is in discarding the cooking liquid before adding the BBQ sauce. Sounds strange, but boy oh boy did it work. The pork ribs were flavorful and tender, and the sauce actually stuck to them instead of ending up a watery pool on the plate. You should give them a try!!

3-4 pounds boneless pork ribs
1/2 tsp salt
1/4 tsp pepper
1/3 cup brown sugar
3 cloves garlic, minced
1 onion, sliced
1/2 cup apple juice
1 – 1 1/2 cups barbecue sauce
Sprinkle the salt and pepper over the ribs and place in the crock pot. Add the remaining ingredients except for the BBQ sauce. Cover and cook on LOW for 7-8 hours. Remove the pork ribs from the crock pot. Discard all of the liquid that is left in the crock pot. Return the ribs to the crock pot and pour the BBQ sauce over the top of them. Cook on HIGH for about an hour. Enjoy!