This post may contain affiliate links, which gives me a small percentage of the sale, at no cost to you.
Home » Recipe Index » Dessert: Pies and Crisps » Caramel Pear Cake

We had quite a few pears left over after we finished canning this weekend. I mentioned to my mom that I was going to have to find a pear recipe to try out. She told me that I absolutely must try a recipe called Caramel Pear Pudding. She said that it was the bomb. OK, not her actual words, but you get the idea.

So I tried it. Oh my. Best pear dessert I’ve ever tasted. And it was so easy to make. It’s very similar to my hot fudge cake recipe, just with a fall twist. (By the way, if you haven’t tried the chocolate version, you really should.) So anyway, you mix up a cinnamony cake batter with chunks of pears, then just pour the sauce ingredients on top. As it bakes, the cake part rises to the top, and you have a yummy layer of caramel sauce on the bottom. My mom called it caramel pear pudding, but I’m calling it Caramel Pear Cake. You can call it whatever the heck you want to. Just try it. My kids are already asking when I’m going to make it again. 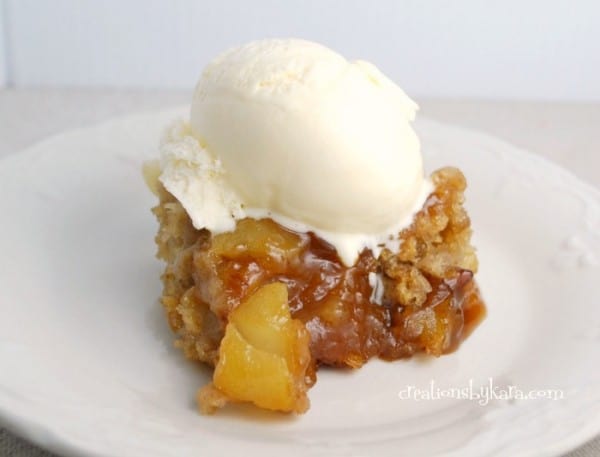 Combine flour, sugar, baking powder, salt, and spices. Stir in milk, pears, and nuts. Spread into an ungreased 8″ square pan. In a small bowl, combine brown sugar, butter, and boiling water. Stir till butter melts. Pour over the top of the batter. Do not stir! Place in a preheated 375° oven and bake for 45-50 minutes. Serve warm (0r hot if you’re impatient like us) with a scoop of vanilla ice cream. Yummo!