This post may contain affiliate links, which gives me a small percentage of the sale, at no cost to you.
Home » DIY & Tutorials » Painting » Product Review- Dry Dex Spackling

I got home yesterday from Bloggy Boot Camp in St. George, Utah. Half of my family had the stomach flu when I left, the other half got it while I was gone. And unfortunately, the very last day of Boot Camp, it caught up with me too. Thankfully, it didn’t hit till there was less than two hours left, so I made it through.

I had a blast up till that point; it is awesome getting together with other women bloggers and making connections. I roomed with Ashlee, Adrian, and Nicole, and it was a blast! Thanks Ashlee for sharing your grandma’s condo with us!

I actually meant to schedule this review to post while I was gone, but something went wrong. Since I’m still not feeling 100%, I’m sharing it now instead of a recipe like I usually do on Mondays. Because I don’t feel much like talking about food right now. 😉

When you have four boys, you get a lot of dents in the wall. And an insane amount of dents on your baseboards. I am constantly doing paint touch ups. And I like to refinish furniture that I purchase at thrift stores. It’s not always in the greatest condition and in some cases it looks like it’s been through a war. What I’m trying to say is: I’ve always got holes to fill.

I saw this Spackling at the hardware store and decided to give it a try. It is made by Dap and has a dry time indicator. Which is to say that it goes on pink and dries white. 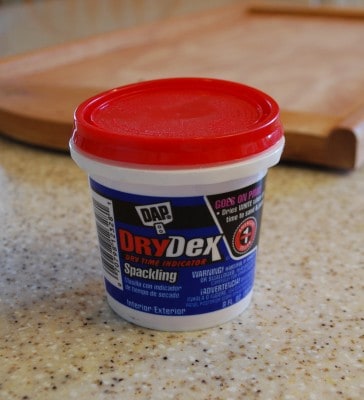 I have to say that I love this stuff! I am impatient, and I want to be finished with a project as soon as I can. With my old spackling, I could never tell when it was dry. This takes the guesswork out of it. As soon as it’s completely white, I know it’s ready to sand and paint. Awesome!

I used it when I was refinishing my calendar holder.
See how it goes on pink: 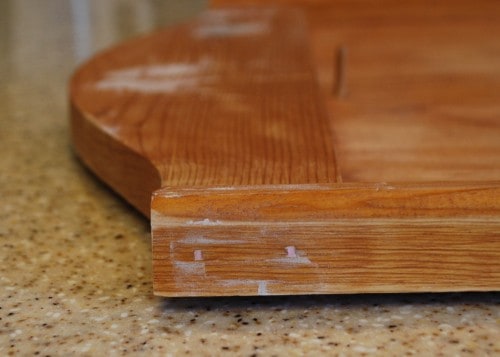 And then turns white when it’s nice and ready. How cool is that!

Disclaimer: I purchased this spackling with my hard earned cash, and was not bribed in any way to do this review. Just in case you were wondering. 😉