This post may contain affiliate links, which gives me a small percentage of the sale, at no cost to you.
Home » Recipe Index » Dessert: Cakes and Cupcakes » Coconut Cupcakes with Cream Cheese Frosting
Jump to Recipe

I actually went an entire week without trying one new recipe. With the boys out of school, we’ve been busy doing yardwork and getting our garden finished, so I haven’t had much time to be creative in the kitchen. I do have a few recipes picked out for the upcoming week though, and I can’t wait to try them out.

One of the other reasons I haven’t branched out much lately is that I have been eating tons of salad. Our neighborhood is doing a “Biggest Loser” competition and I decided to join in. We have till September, and my goal is to lose 15 pounds. I’m hoping that with all of the encouragement, support, and competition, that I will be successful this time. I’m not a believer in strict diets that eliminate an entire food group, so I’ll just be eating smaller portions, cutting back on sugar, exercising more often, and eating lots of salad. I was lucky this last week because our neighbors gave us lots of lettuce from their garden and it was wonderful!

I will be trying a few healthy recipes, and if they turn out fabulous, I will share them. But don’t worry, I won’t post anything too strange. I’ll still be fixing regular meals for my family, they aren’t on a diet. There’s no way I could go an entire summer with no treats, so if you have a sweet tooth, don’t despair! (Plus I have a bunch of good ones saved up on my computer.)

Here is one of those great recipes that I’ve been saving. I made these Coconut Cupcakes back in May, and they were some of the best cupcakes we’ve ever had. I got the recipe from the Barefoot Contessa. When I saw that they had buttermilk, I thought they would be fabulous, and I was right. I did make a few slight changes though. 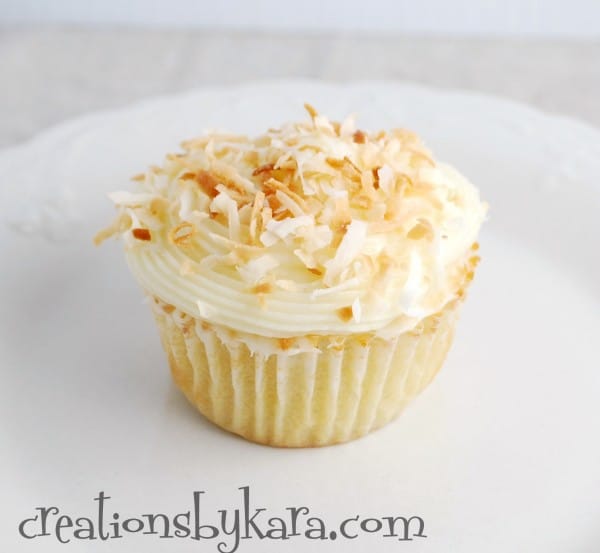 First of all, she said to fill the liners to the top. I did, and the batter spread out over the tops so much that some of the cupcakes were stuck together. They still tasted great, but weren’t as pretty. I think it would be better to fill them less full, and I made that change in the recipe below.
Update: I’ve made these cupcakes again filling the liners just over half full, and as you can see in the new photo, they worked much better.