This post may contain affiliate links, which gives me a small percentage of the sale, at no cost to you.
Home » Recipe Index » Simply Delicious Cinnamon Raisin Biscuits 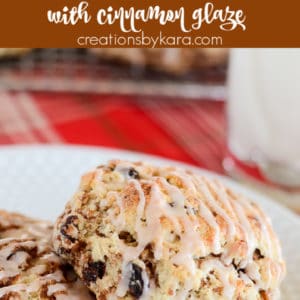 Cinnamon Raisin Biscuits – with a cinnamon swirl, plump raisins, and cinnamon glaze, these sweet biscuits are a perfect breakfast treat! 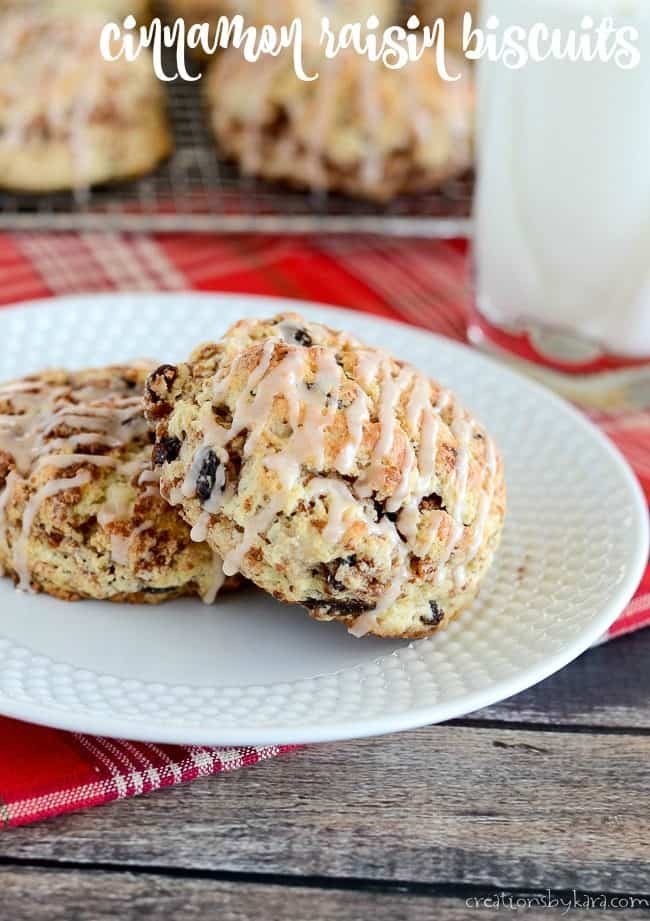 My first ever real job, besides babysitting, was working at Hardee’s when I was 16. I remember my dad hauling me down to the building they were doing interviews in. (The restaurant wasn’t even open yet.) I was not very thrilled with him. But they interviewed me, hired me that afternoon, and started training me the next week.

And you know what, I actually loved that job! I worked with some really fun people, and made a bunch of new friends. And of course it was nice having the extra cash. 🙂

One thing I remember about working there was the amazing cinnamon raisin biscuits. I didn’t usually work the morning shift, but sometimes my lunch shift would start early enough that I could buy some before work. I’m not even a huge fan of raisins, but man I loved those biscuits! Nice and cinnamon-y with a yummy glaze on top, and oh so good all warm and gooey. 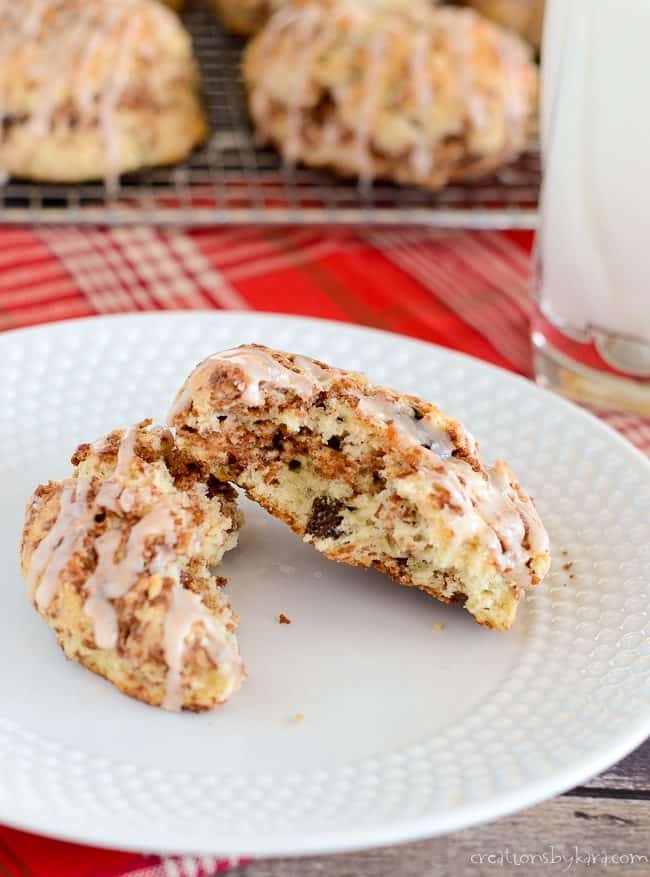 So for the next few months I kept tweaking the recipe till I finally came up with a version that I loved. It is not the same as the original biscuits, but to be honest I think I like these even more. Can’t remember for sure, it has been almost 20 years. Yikes, it’s painful to type that! 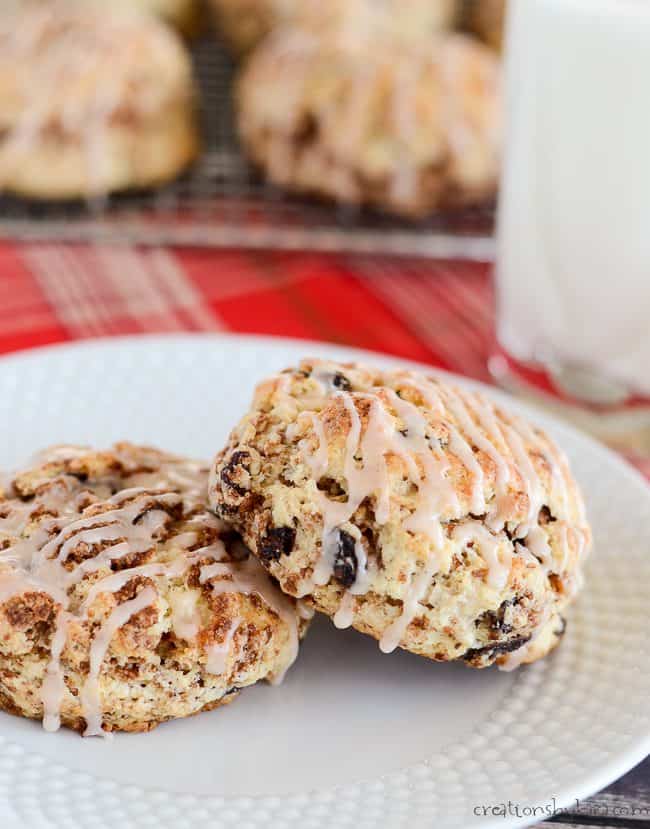 Anyway, they are full of cinnamon flavor, and are nice and tender. And the cinnamon glaze on top makes them extra special. They are best served warm, so if you have any leftovers, just pop them in the microwave for a few seconds. They also freeze well, so sometimes I make a double batch and freeze half of them in a ziplock bag or Tupperware container. They warm up just perfectly in the microwave.

How to make cinnamon raisin biscuits:

These biscuits start with a cinnamon swirl, and you need to make that first. Crush up some bran flakes very finely, then add cinnamon, brown sugar, and melted butter.

For the biscuit part, grate frozen butter into the dry ingredients, then gently stir in milk, eggs, vanilla, and raisins. Gently fold in the cinnamon swirl.

Pat the dough out to about 1″ thick on a floured counter, then cut out your biscuits. For extra flaky biscuits, freeze for 30 minutes. Bake at 425° for 14-18 minutes. 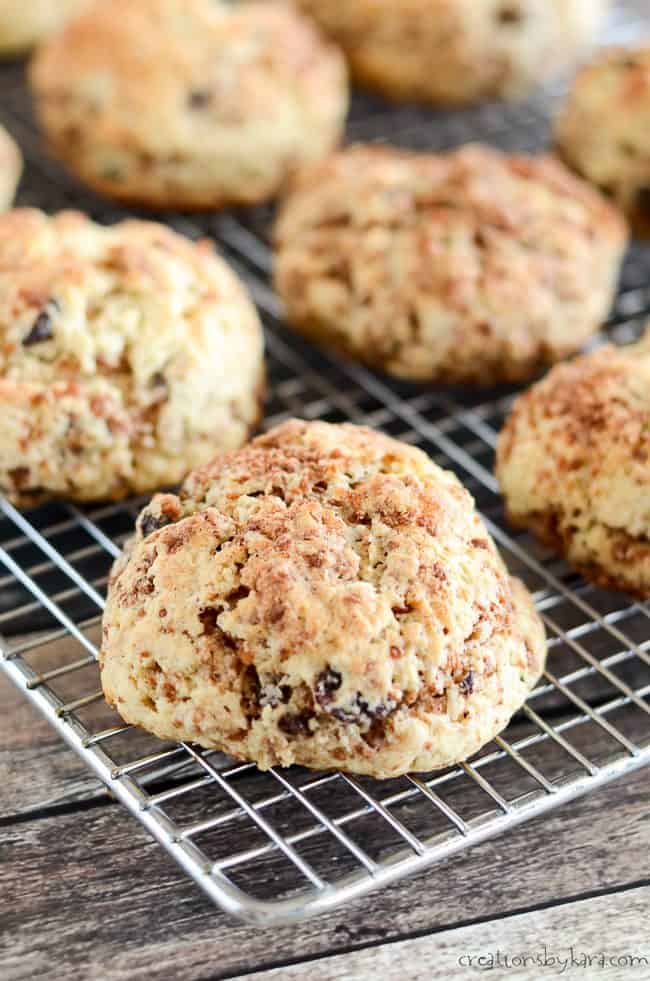 After the biscuits come out of the oven, whisk together a simple cinnamon glaze and drizzle it over the tops. Melt in your mouth delicious!! 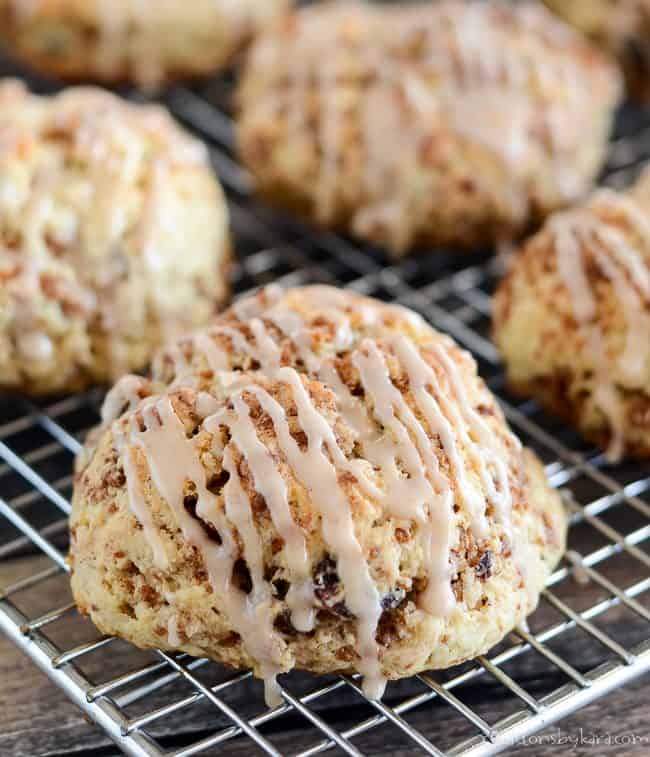 How to store raisin biscuits:

You can store them in an airtight container at room temperature for about 3 days.

If you need to store them longer, they freeze really well. It’s best to freeze them before adding the icing. But if you need to, you can freeze them after adding the glaze. Let them cool completely and make sure the glaze is set. Freeze them in a single layer for 1-2 hours, then you can place them in ziplock bags or rubbermaid containers. 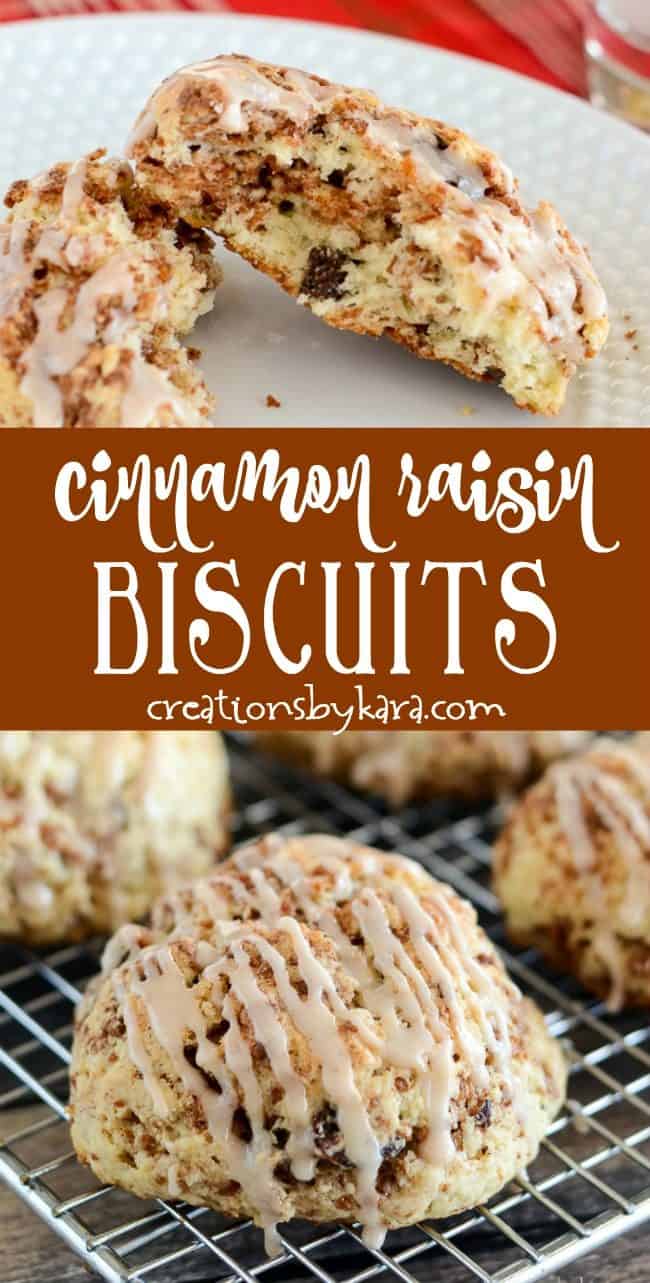 Need even more biscuit and scone recipes to try? Here you go!

We don’t eat raisins very fast at my house, so sometimes they get pretty dried out. I like to plump them up by soaking them in hot water for about 30 minutes, then draining them really well before adding them to the biscuit dough.