This post may contain affiliate links, which gives me a small percentage of the sale, at no cost to you.
Home » Recipe Index » Dessert: Misc. » Baked Cinnamon Sugar Donuts Recipe 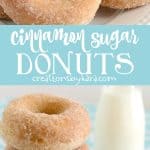 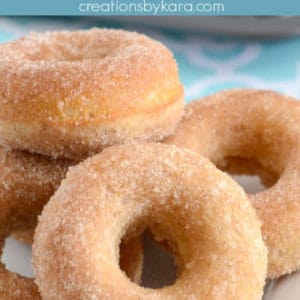 Baked Cinnamon Sugar Donuts– melt in your mouth baked donuts with a hint of nutmeg, rolled in cinnamon sugar.

Is there anything that brings people running faster than the smell of cinnamon sugar baking? My kids are also big fans of Cinnamon Streusel Coffee Cake and Cinnamon Crumb Dessert Pizza. 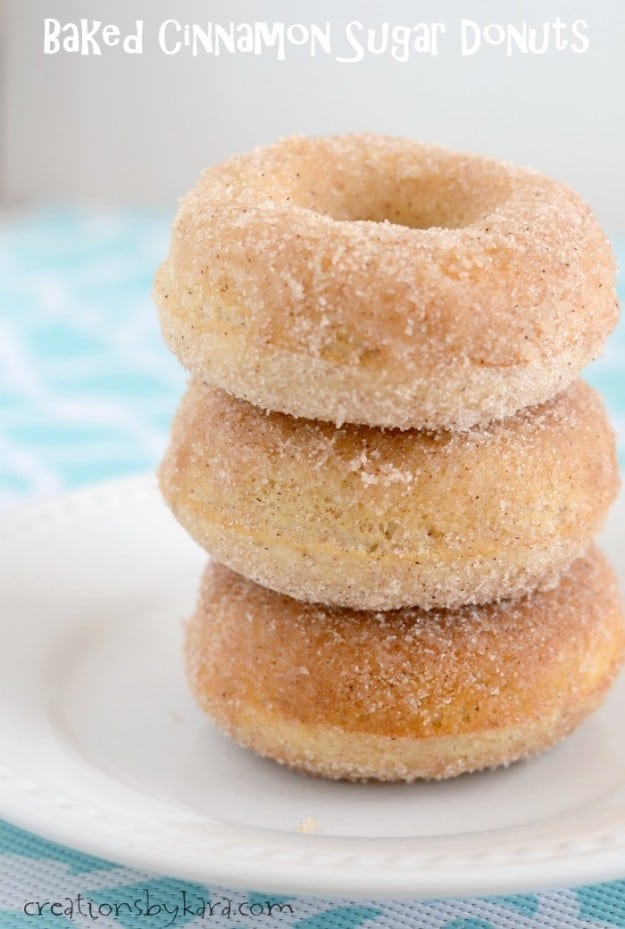 I have always been a little leery of making baked donuts. Honestly, I thought there was no way they could actually taste good. I thought that without being fried, they would just be dry little hockey pucks with a hole in the middle. So I avoided them.

But the theme for my Celebrating Food group is donuts this month, and I really didn’t want to deal with the mess of frying donuts, so bought a donut pan and decided I’d better give them a try. 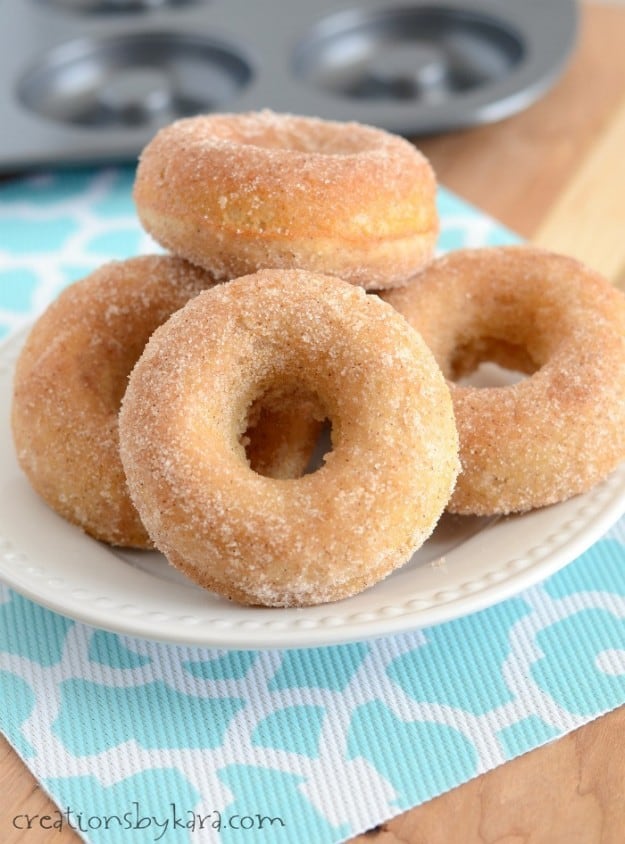 Whoa. I should have purchase a donut pan ages ago! I was so wrong about baked donuts. They are simply heavenly!! 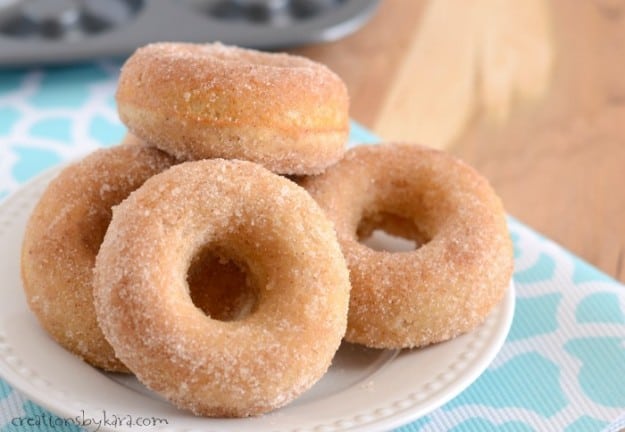 I made three different recipes the week my pan arrived, and every one of them was absolutely delicious! Can’t wait to share the rest with you. Everyone had a different favorite, but Rachel and I liked these the best.

As soon as she picked up her donut, Rachel said: “Mmmm, these smell like Christmas.” Yes they do Rachel, yes they do. And there’s nothing wrong with your house smelling like Christmas in the middle of June. 🙂 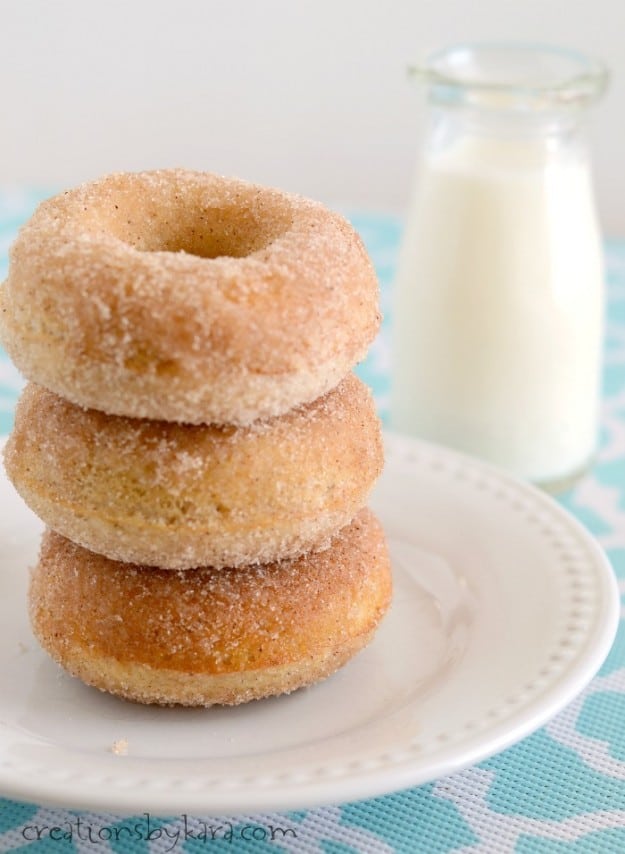 Whisk together dry ingredients in a mixing bowl. In a small bowl, whisk together the buttermilk, egg, melted butter, and vanilla. Add the wet ingredients to the dry mixture and stir till just combined.

Bake at 375° for 11-12 minutes. Let cool for a couple minutes, then remove to cooling racks. While still warm, brush all sides of each donut with melted butter, then dip in the cinnamon sugar mixture till well coated.

How to store baked donuts:

These donuts are best eaten the same day, but if you need to store them, let them cool completely, then place them in an airtight container and store them at room temperature. They will keep for a day or two. 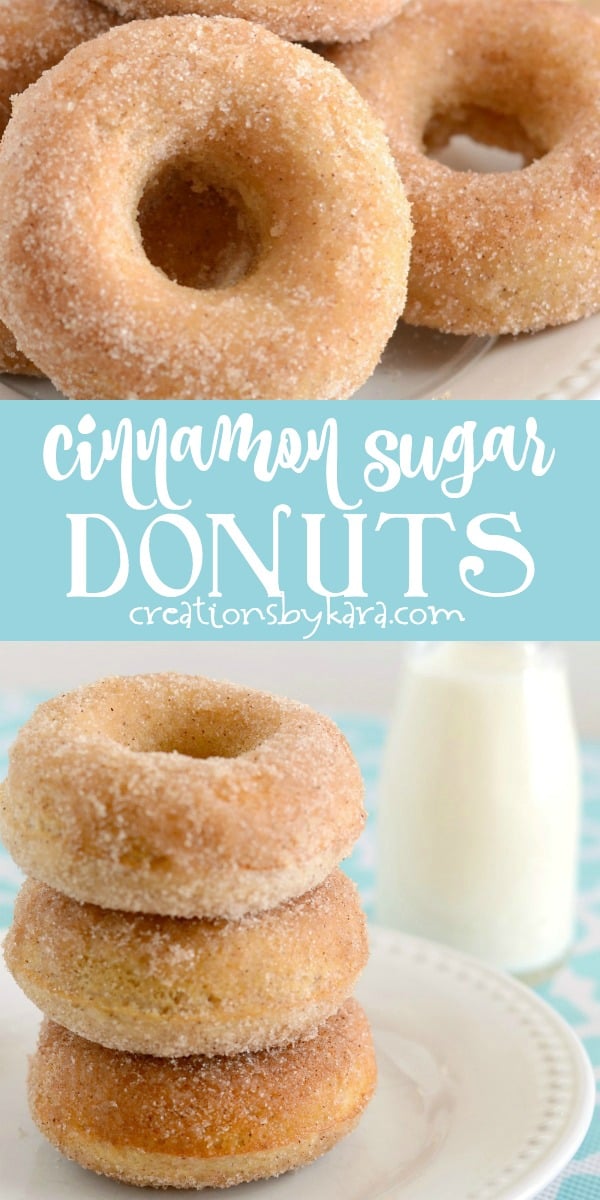 And as always, my blogging buddies have come up with some rockin’ awesome donut recipes as well. Be sure you check them out!

And here are a few more homemade donuts to check out: