This post may contain affiliate links, which gives me a small percentage of the sale, at no cost to you.
Home » Recipe Index » Side Dishes » Potato Balls

I wish that I could show you some pictures of my newly painted kitchen. But for the 5 and a half minutes that the sun was actually shining so that I had good enough lighting, I was in the middle of a baking marathon, and the kitchen was in no state to be photographed. So, until the stars align and I happen to have a clean kitchen and sunshine for more than 2 minutes at a time, you’ll just have to wait.

In the meantime, I’ll be sharing other projects and recipes. First up is a recipe for potato balls. We have potatoes coming out our ears because we were nice enough to support a local scout who was selling bags of potatoes as a fundraiser. Sixty pound bags of potatoes. What was I thinking!?! The bag was so large it wouldn’t even fit in the bottom of my pantry. Yikes!! Needless to say, I’m trying to come up with lots of creative potato recipes!

These potato balls have actually been in my recipe book for years. My family loves them, and I don’t make them nearly enough. It is awesome to cut through the crunchy crust and find the melty cheese in the middle. They are so yummy! I didn’t take the photo till after we were done eating, so the cheese had cooled, but you get the idea. 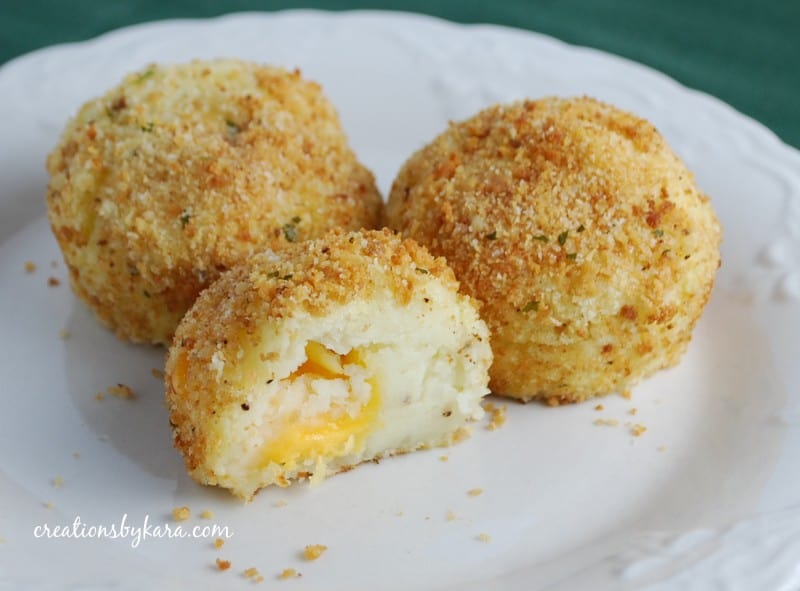 4 medium potatoes
1 tsp salt (or to taste)
2 Tbsp butter
1/4-1/3 cup milk
1/4 tsp pepper
1 egg yolk
1/2 pound cheddar cheese
2 Tbsp melted butter
1 cup seasoned bread crumbs
Peel and cube potatoes. Boil in salted water till tender. Drain and mash with salt, butter, milk, pepper, and egg yolk. (They should be fairly stiff.) Let cool slightly. Cut cheese into 1″ cubes. Place melted butter in a shallow bowl, and bread crumbs in another shallow bowl. Shape the mashed potato mixture around each cheese cube. Roll in melted butter, then crumbs. Place in greased muffin tins. Bake at 400 for about 15 minutes or till golden brown. Potatoes should be crunchy on the outside, the cheese should be melted on the inside.