This post may contain affiliate links, which gives me a small percentage of the sale, at no cost to you.
Home » Recipe Index » Soups » Potato Corn Chowder with Bacon Recipe 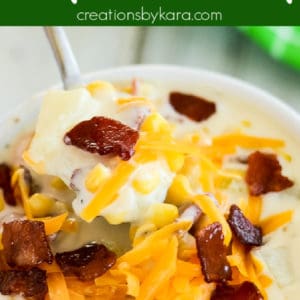 Warm up with a bowl of this comforting Potato Corn Chowder when nights are chilly. It is loaded with chunks of potato, salty bacon, and sweet corn. Every bite is rich, creamy, and downright delicious! 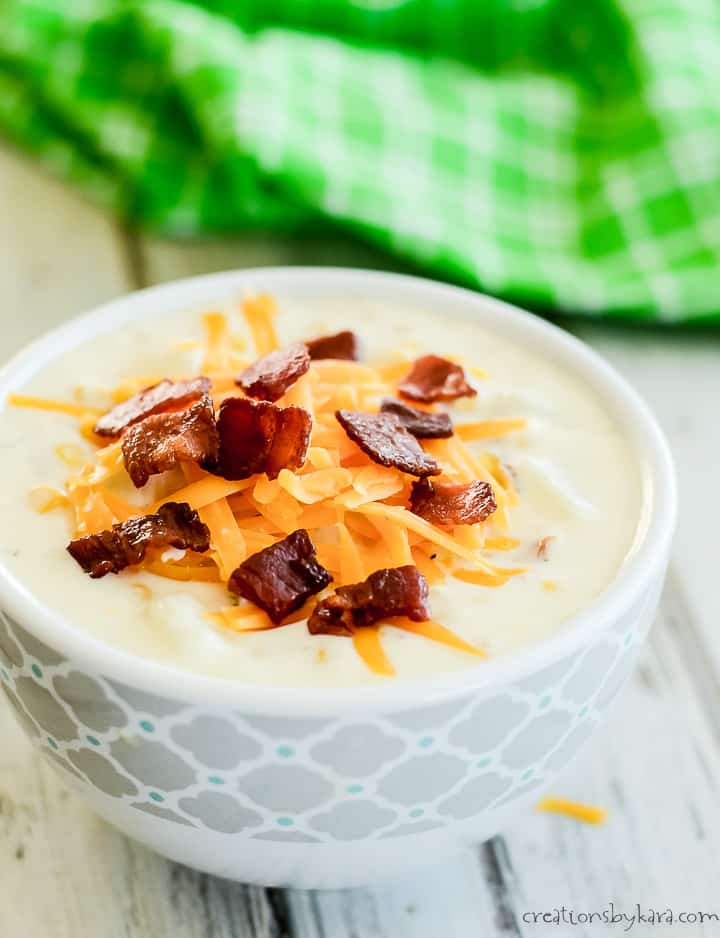 I have over a dozen recipes for soup, but this corn and potato chowder is definitely a favorite at our house. Bacon just makes everything taste better, and this corn chowder soup is no exception!

With most creamy soups, you thicken them with butter and flour. But for this corn and bacon chowder, you actually use the drippings from the cooked bacon instead of butter.

It adds such a great smoky, rich flavor that I’ve had several people tell me this is the best corn chowder they’ve ever tasted!

And in addition to the bacon in the soup, I like to save some to serve additional bacon bits top of the soup. Delish! 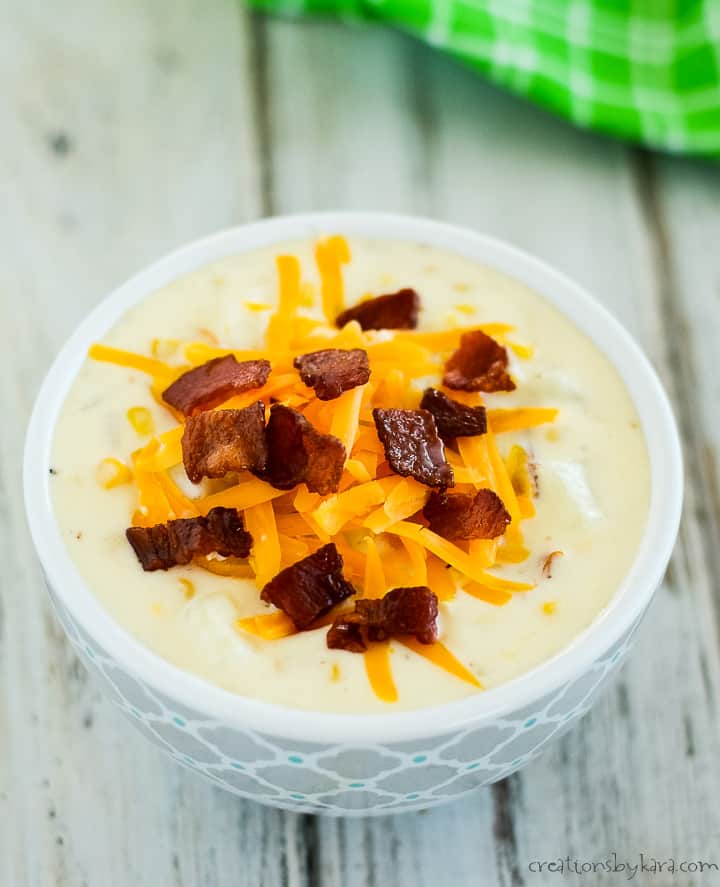 HOW TO MAKE CORN CHOWDER:

This recipe does make a large pot of chowder, so feel free to cut it in half if you have a small family.

Like having a visual when you cook? Watch the video below to learn how to make bacon corn chowder!

HOW TO STORE LEFTOVER SOUP

Leftovers will keep for 4-5 days in the refrigerator if stored in an airtight container.  We actually think it tastes better the next day.

You can reheat it in a soup pot or saucepan, or heat individual servings in glass bowls in the microwave for 1-2 minutes.

I don’t recommend freezing leftover chowder because it changes the texture. Unfortunately, the potatoes tend to disintegrate, and the cream mixture can separate. 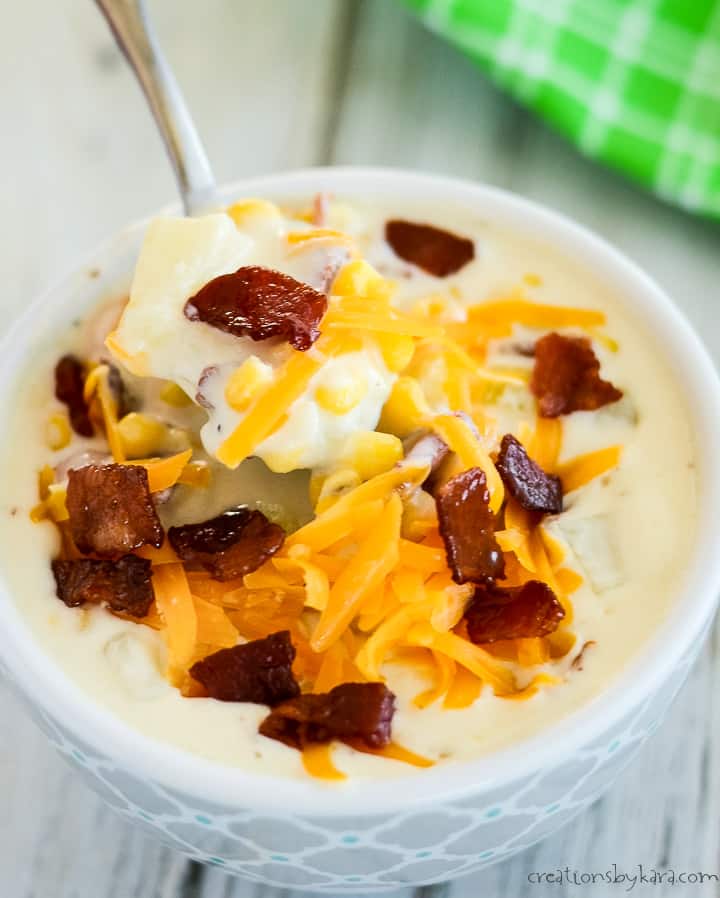 WHAT TO SERVE WITH CORN CHOWDER 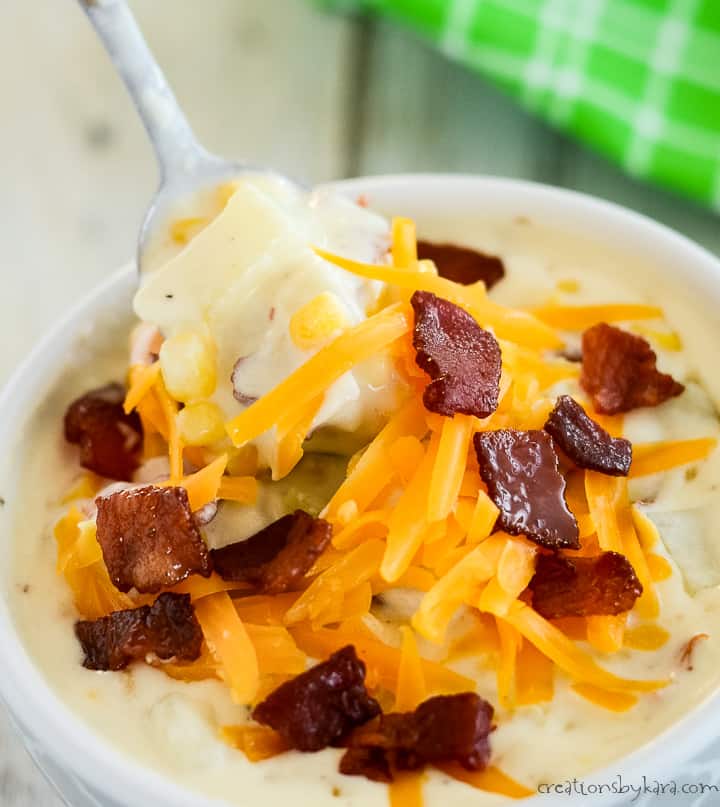 -If you have fresh corn, (lucky you), it works great. I don't recommend canned corn, it makes the soup overly salty and doesn't add any sweetness. But it will work in a pinch.

-Make sure you brown your bacon over low or medium low heat or the drippings will burn and turn the soup an ugly color. Sadly, I learned this the hard way.

My family loves this potato corn chowder recipe during the winter, but it is also a great recipe to make during the summer months if you have fresh corn!
Previous Post: « Easy Andes Mint Brownies Recipe
Next Post: Easy Decadent Blender Chocolate Mousse »