This post may contain affiliate links, which gives me a small percentage of the sale, at no cost to you.
Home » Recipe Index » Bread: Yeast Bread » Cake Mix Cinnamon Rolls 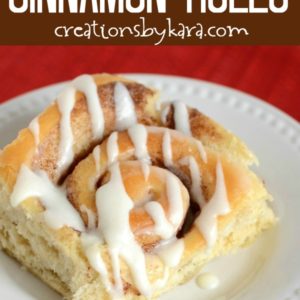 Cake Mix Cinnamon Rolls – quick and easy sweet rolls you’ll love! A cake mix in the dough makes these cinnamon rolls so soft, and so flavorful!

Most of the time I like baking from scratch, but there are a few shortcut recipes like this that I love. My Chocolate Lover’s Bundt Cake, and my Caramel Brownies are two more AMAZING recipes that start with a cake mix. 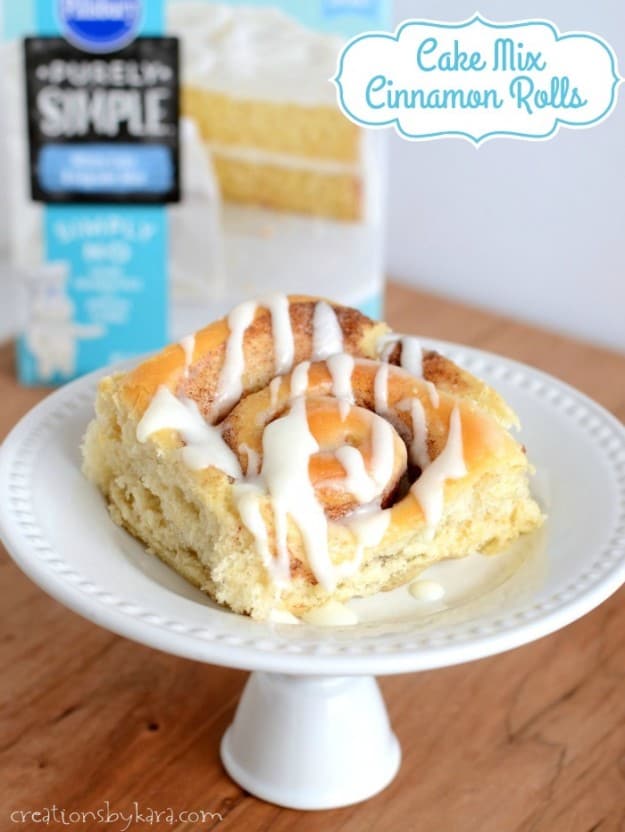 Several years ago a tried an awesome homemade cinnamon roll at a friends house. It was so soft and tender that I asked her for the secret. She told me the recipe called for a cake mix. I was totally surprised!

I left her house with the recipe, and I have made them several times over the years. They always turn out great! The dough is so soft and silky, I love working with it. 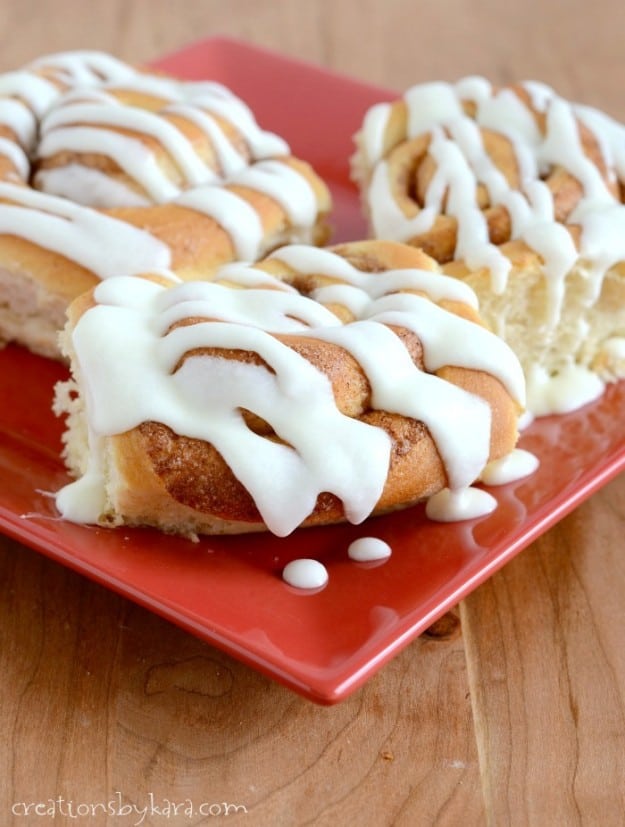 It had actually been a really long time since I had made them, and my boys immediately noticed that they were different than regular cinnamon rolls. The dough is sweeter, and so flavorful.

Because of the sweetness in the dough, the filling needs less sugar, and I add extra cinnamon to balance it out. They are scrumptious! 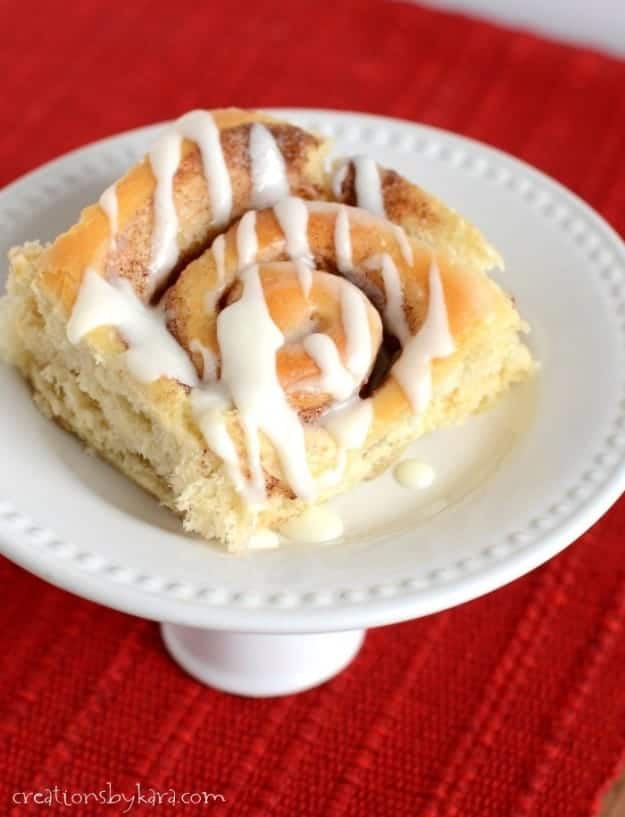 How to Make Cinnamon Rolls with a Cake Mix

Start by dissolving your yeast in warm water. Next you add your cake mix, oil, eggs, salt, and enough flour to make a soft dough. Roll out into a rectangle just as you would any cinnamon roll recipe. Spread soft butter over the dough, and sprinkle with cinnamon sugar mixture.

Roll up the dough and cut into slices, place the rolls on baking pans. Bake till golden brown.

Of course a cinnamon roll is not complete without frosting oozing into all the cracks. I love to use buttermilk or sour cream in my cinnamon roll frosting. It gives a little bit of a tang, which is perfect for offsetting the sweetness.

It’s similar to cream cheese frosting, but without the cream cheese. But if all you have is milk, trust me, these will still be good enough that you will want to lick your fingers! 🙂

PRO TIP – instead of rolling dough on a lightly floured surface, I prefer to spray my counter with non stick cooking spray. That way I don’t work any extra flour into the dough, which can make the cinnamon rolls dry.

How to make Cinnamon Roll Frosting

Beat all ingredients together till smooth, adding enough buttermilk to get the consistency you want. Drizzle frosting on cinnamon rolls while they are warm.

How to store cinnamon rolls:

Cinnamon rolls are one baked good that is definitely best warm from the oven. If you need to store them, cover them well with plastic wrap or store them in an airtight container after they have cooled. They will last for two to three days.

We think it’s best to reheat them in the microwave for a few seconds before serving.

Can I prepare these the night before and bake them in the morning?

I’ve had decent luck doing that with other cinnamon roll recipes, but I didn’t care for the way these turned out. The extra sugar in the dough causes them to rise faster, so the texture was more course instead of soft. I also felt like they had a bit of a fermented flavor. So no, I don’t recommend letting them rise overnight. 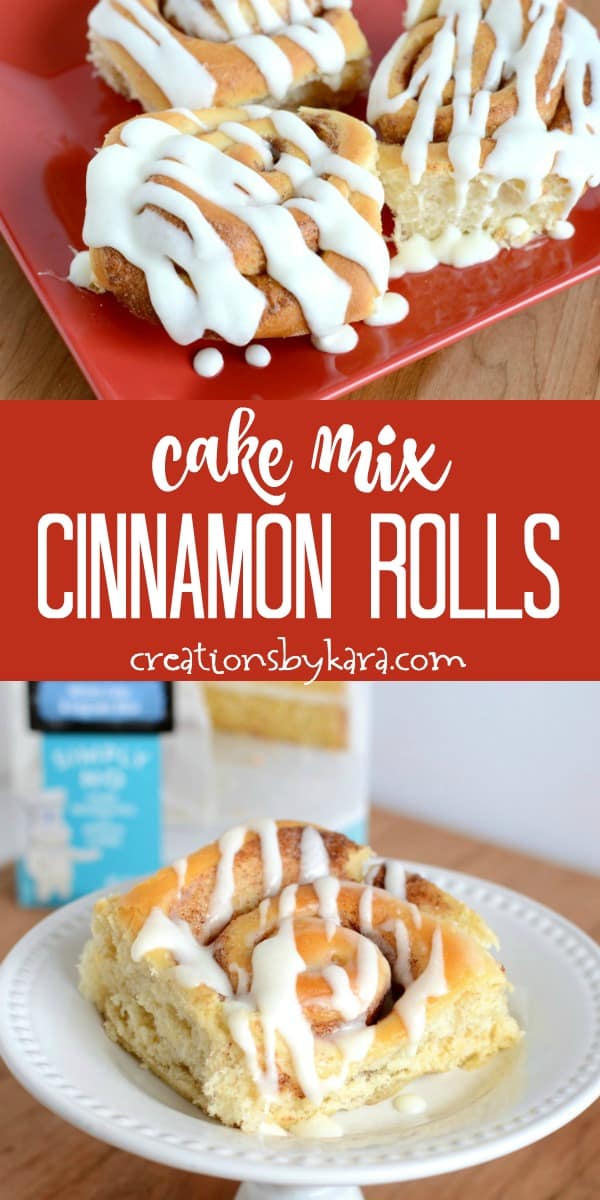 The extra sugar in the dough makes these cinnamon rolls raise pretty quickly, so make sure you check on them often. If they raise too long they will end up with pockets of air in them.