This post may contain affiliate links, which gives me a small percentage of the sale, at no cost to you.
Home » Recipe Index » Easiest Cinnamon Biscuits with Cinnamon Glaze 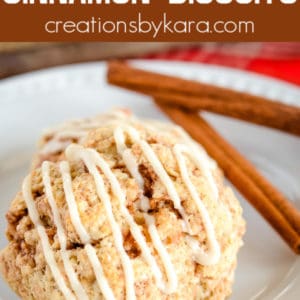 Easy Cinnamon Biscuits – It takes less than 15 minutes to whip up these easy drop biscuits. With a cinnamon sugar swirl and cinnamon glaze, they are simply amazing! 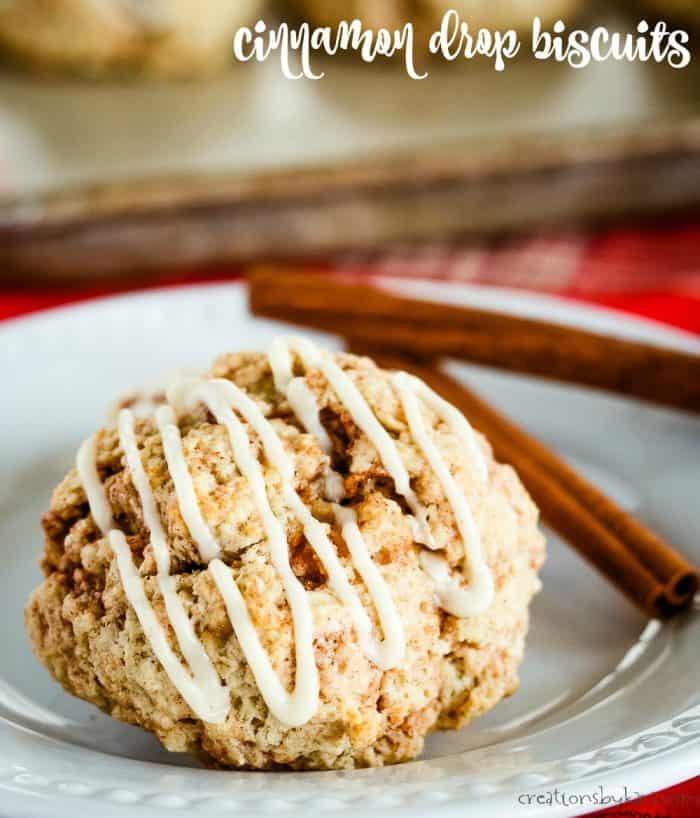 Oh cinnamon. I love it. Not just the way it tastes, but the way it smells. If it didn’t drive my family crazy, I would use cinnamon scented candles and air freshener all year long.

Of course one of the best cinnamon baked goods of all time is cinnamon rolls. But I don’t always have time for those. These cinnamon biscuits are infinitely easier, and you can have one of them in your mouth in about 30 minutes.

One thing I love about these biscuits is that you don’t need to roll them out. They are drop biscuits, so the dough is more sticky than traditional biscuit dough. Just scoop the dough onto cookie sheets straight from the bowl. So easy, and much less cleanup!

To top it off, I added a bit of cinnamon to the glaze. Every bite of these biscuits is full of cinnamon flavor! 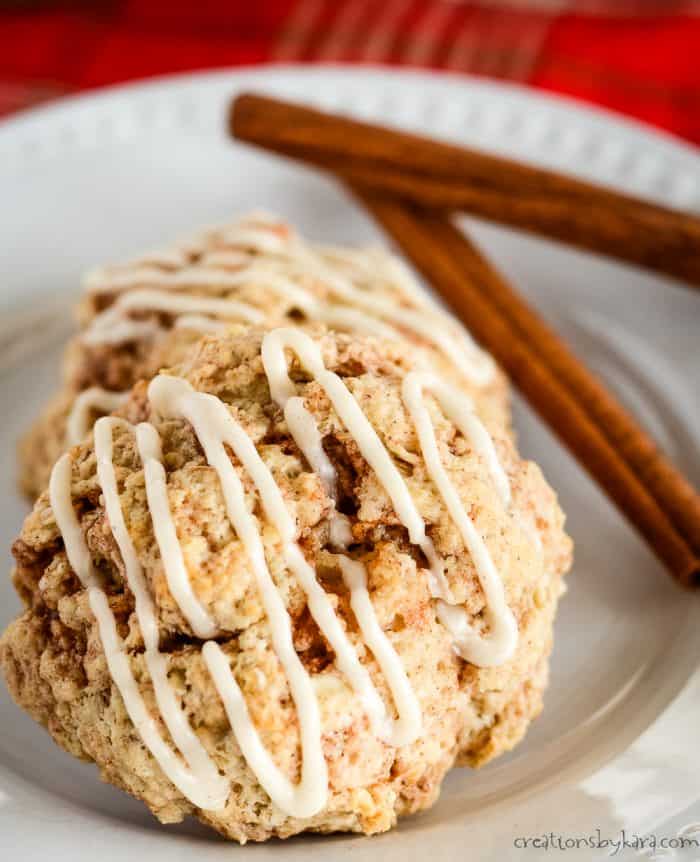 How to make Homemade Cinnamon Biscuits

Ingredients needed for this recipe:

These biscuits are so easy! There’s no need to cut in butter, and you don’t have to roll them out.

Start by melting your butter, then let it cool. Whisk together your dry ingredients in a large bowl. In a large glass measuring cup, whisk together the milk, egg, and vanilla. Add the melted butter, and stir till clumps form.

With this method, you get little chunks of butter without having to use a pastry cutter to cut butter into your dry ingredients. So much easier! 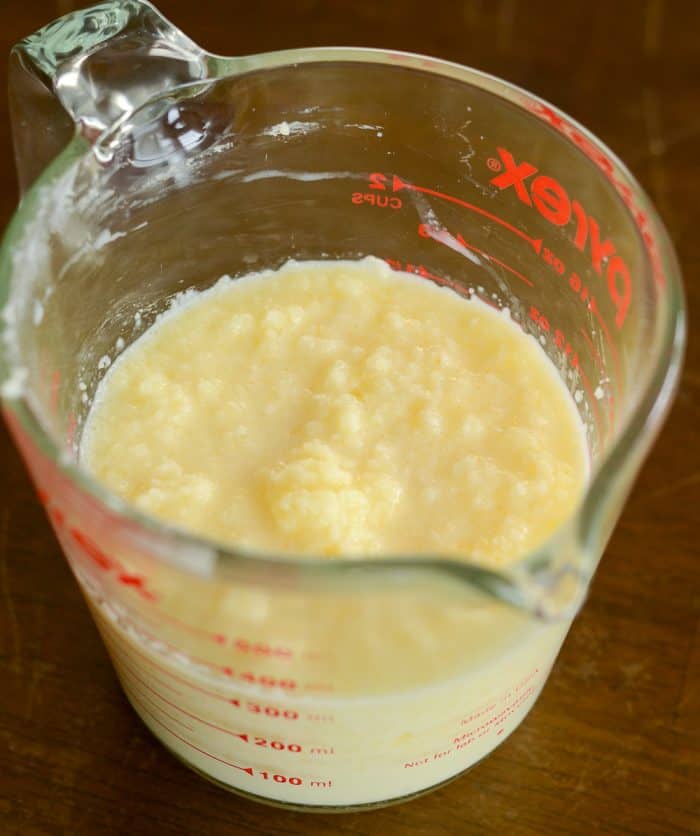 Add the milk/butter mixture to your dry ingredients and stir till flour is barely moistened. Sprinkle cinnamon sugar mixture over the dough, then gently fold it in, just till swirls appear.

No need to roll out the dough, just scoop it onto baking sheets. I like to use an ice cream scoop to make sure all the biscuits are the same size. Pop the pan into the oven and bake till the cinnamon biscuits are golden brown. Drizzle them with a simple cinnamon glaze while they are still warm. 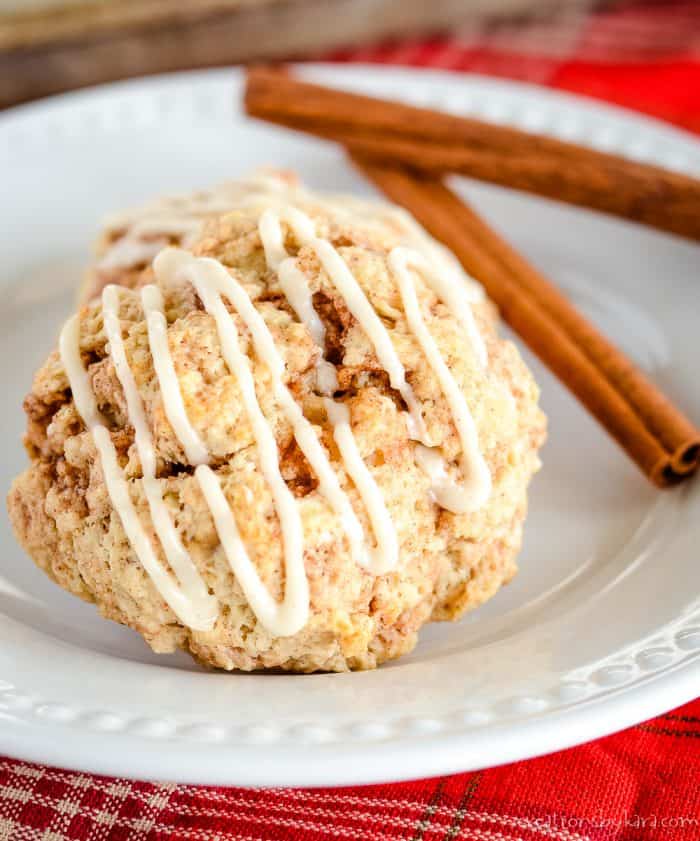 -Make sure your milk is very cold, and that your melted butter has cooled. You need the milk to be cold enough that it will chill the butter and cause it to clump together. If the butter is still hot, it will just heat up the milk.

-Be gentle when stirring the dough, because if you overwork it you will end up with tough biscuits.

-I like to pour my icing into a ziplock bag, then snip the corner. It makes drizzling glaze so much easier, and gives you professional looking results.

How to store Cinnamon Biscuits

– We like them best served warm and fresh from the oven, but they will keep for about 2 days at room temperature in an airtight container.

-If you need to store them longer, they do freeze well. Just make sure the icing has completely set before you freeze them. Or better yet, freeze them without the icing and add it just before you serve them. I like to freeze mine in gallon sized freezer ziplock bags. 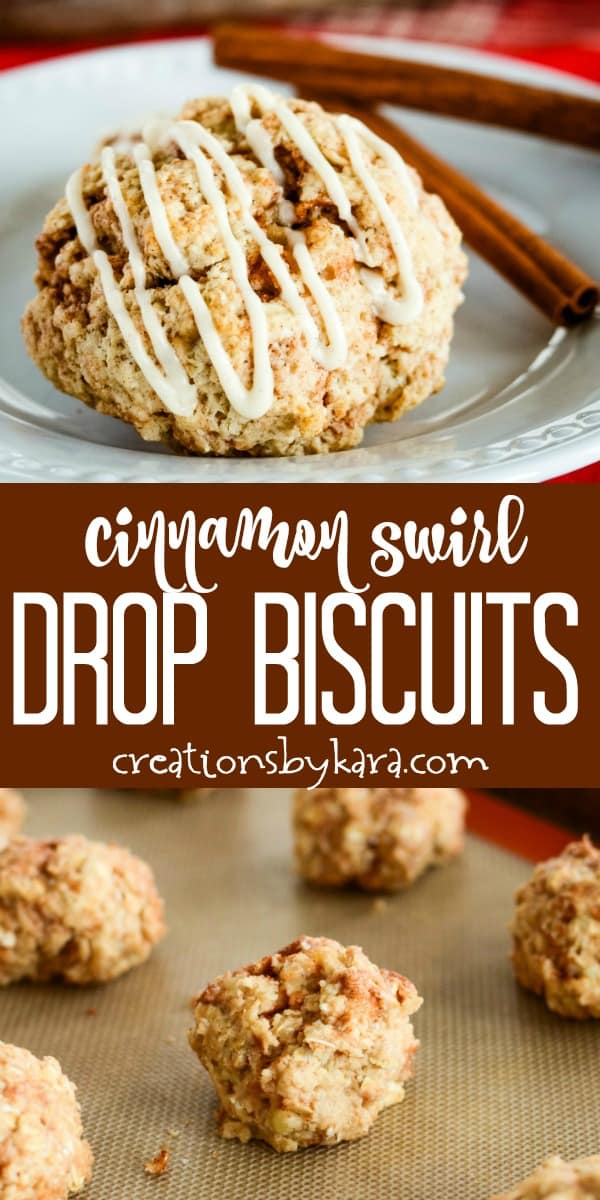 Made From Scratch Cinnamon Biscuits