This post may contain affiliate links, which gives me a small percentage of the sale, at no cost to you.
Home » Recipe Index » Really Good Crockpot Roast Beef {Makes its own gravy} 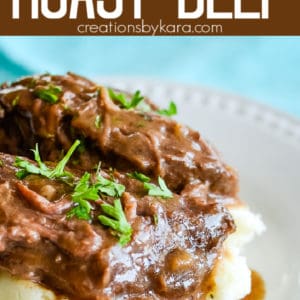 This Crock Pot Roast Beef is fall apart tender, and it makes its own gravy as it cooks. You will love this incredibly flavorful roast beef!

I love serving this roast beef with Garlic Mashed Potatoes and Sesame Green Beans or a tossed green salad. It is my favorite way to eat a roast! 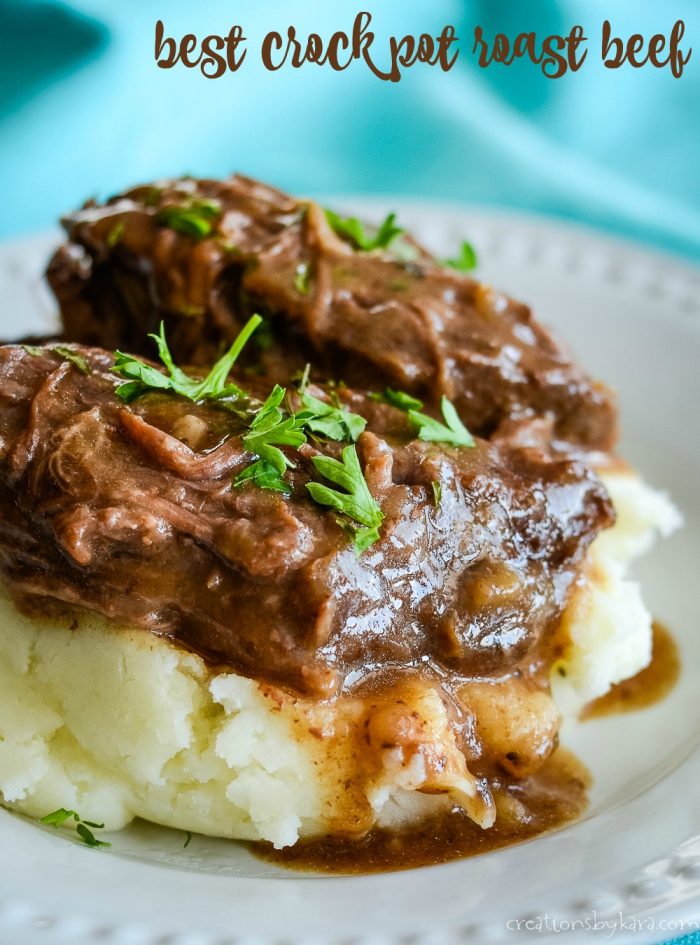 I am not usually a big red meat eater, but my hubbie and four boys love it. It had been awhile since we’d had a roast, so I decided to make one on Sunday. They were beyond thrilled!

I got this recipe for crock pot roast beef from my friend Audrey a few years ago. My family loved it so much that it is now my go-to roast recipe.

Even as a so-so red meat fan, I can have second helpings, so you know it’s good! Honestly, it is the best roast beef crock pot recipe I have ever tasted.

It is crazy easy to make, and it turns out simply heavenly every time. I love that the roast makes its own gravy, no whisking involved. One less pan to wash. Woohoo!

Ingredients you’ll need for this recipe:

Simply brown your meat in a little bit of oil, then sprinkle it with pepper and place it in the bottom of your slow cooker. Add the remaining ingredients to the slow cooker. Cook on low heat for 8-10 hours. That’s it!

Do I have to brown the meat?

No, it’s not required, but it is highly recommended. Searing the meat seals in the juices and adds a richness and depth of flavor. It’s still really good if you skip this step, but it’s not quite as fantastic.

How to cook a beef roast in a crock pot:

To get the most moist slow cooker roast beef, it is best to cook it on low for several hours. When I let it cook in the crock pot for 10 hours, the meat turns out so tender that it is falling apart. I have a hard time getting it out of the crock pot without it falling all to pieces. So yummy!

One time when I made it I forgot to start it in the morning, so I had to cook it on high. It was still mighty tasty, but not nearly so tender. So plan ahead!

How do you know when a crock pot roast is done?

For this recipe, you will know the meat is done when it is falling apart. By then it will have reached an internal temperature of over 145°, which is the temperature considered safe by the USDA for beef.

What kind of roast is best for this slow cooker roast beef recipe?

I recommend using Sirloin tip roast. It always turns out tender and delicious. I buy it when it’s on sale and pop it in the freezer if I’m not going to use it right away. You can use cheaper cuts of meat, but you may need to cook longer to get the same result.

Some cuts of meat just won’t be as tender no matter how long you cook them, but they will still have great flavor with this recipe

Can I use a frozen roast in the crock pot?

There is an ongoing debate about the safety of cooking frozen beef in a slow cooker. Some say that the meat doesn’t heat up fast enough, which can lead to bacteria growth.

I personally have cooked a frozen roast dozens of times and have never had a problem. I think they turn out better when fresh or totally thawed, but you still get good results using a frozen roast.

For this recipe, I cook on high for two hours, then turn the slow cooker down to low and cook for the remaining 8-10 hours.

Can I use something in place of the canned soup?

I’ve been trying to use less processed foods, so typically I make homemade “cream of” soups. However, I have never had success trying to replace them when cooking in the slow cooker. The milk always curdles and it just isn’t appealing. So I recommend sticking with canned cream of mushroom soup.

Of course, if you can’t stand mushrooms, you can use another flavor of soup such as cream of chicken or cream of celery. They do change the flavor though.

My kids don’t like mushrooms, but they still love this recipe. It cooks for so long and is so flavorful that they don’t even notice the mushrooms. 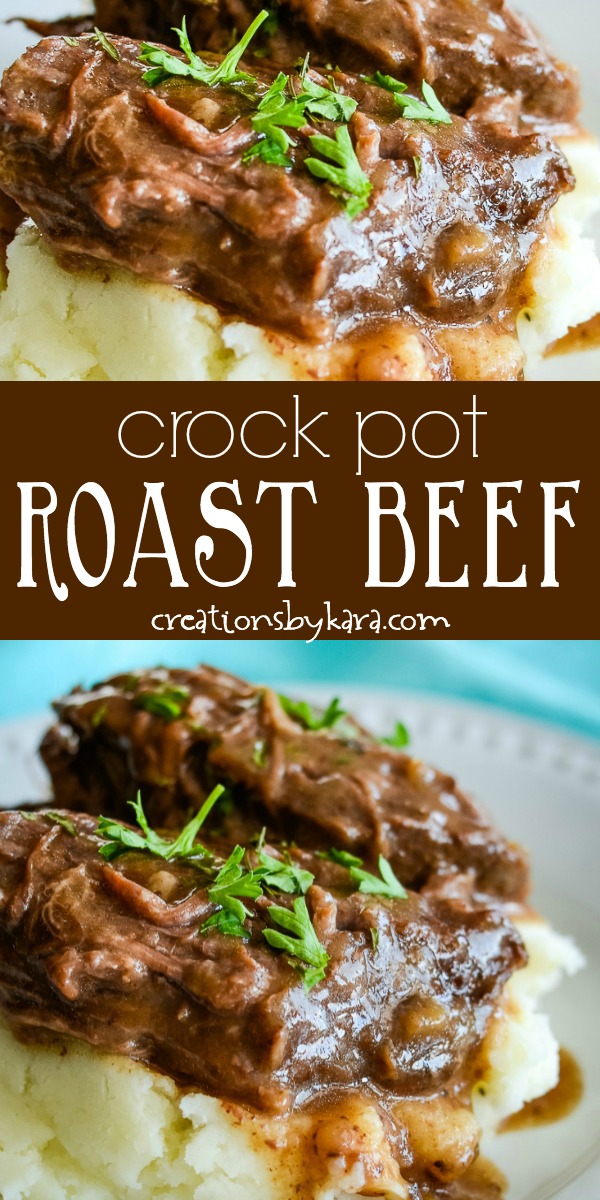 Looking for another slow cooker recipe? Give these a try: