This post may contain affiliate links, which gives me a small percentage of the sale, at no cost to you.
Home » Recipe Index » Cinnamon Swirl Apple Bread Recipe 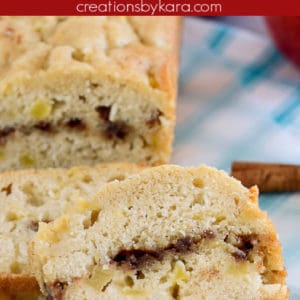 Cinnamon Swirl Apple Bread . . . loaded with chunks of apple, and filled with a ribbon of cinnamon sugar swirl, this quick bread is a must make fall treat! 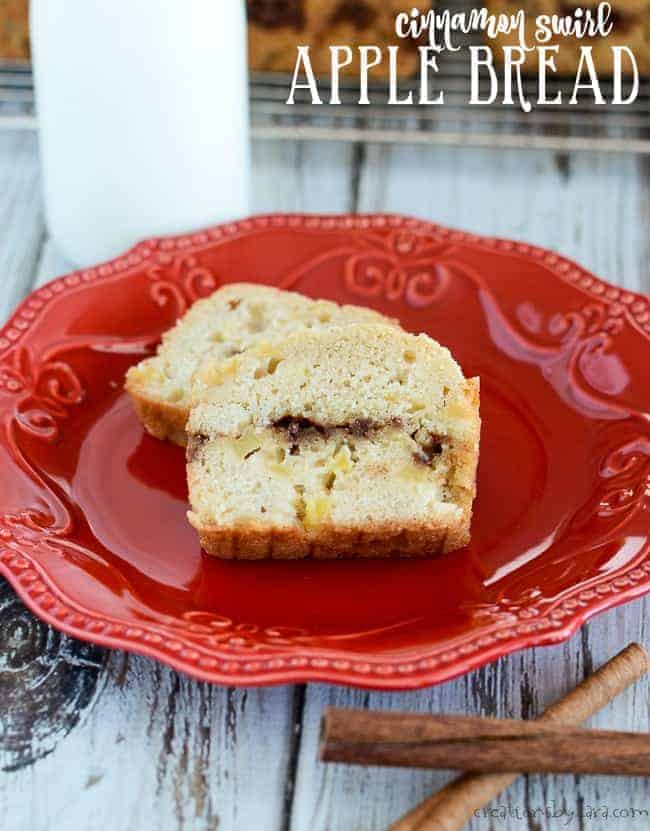 Cinnamon and apples – two flavors that just scream fall. At my house, it just isn’t fall without at least one loaf of apple bread. That smell of apple cinnamon in the air as the apple bread is baking is unbeatable. Man, I’m ready for fall!

This recipe for apple cinnamon quick bread is a new favorite. With a yummy filling of brown sugar and cinnamon, it is hard to beat. We loved the big chunks of juicy apple, but you can finely dice or grate the apples if you prefer. 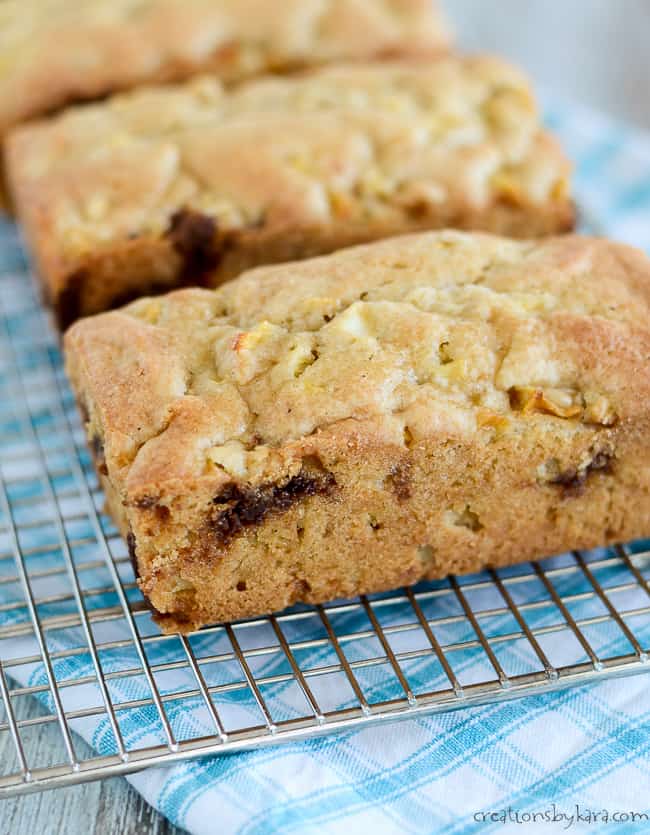 What Kind of Apples Should I Use for Cinnamon Swirl Apple Bread?

-I like to use Granny Smith apples because they hold up while baking without turning mushy. We also love the nice tart flavor.
-Johnagold, Johnathon, Gala, and Honeycrisp apples also work well. I’ve used Golden Delicious in a pinch, but they do get a little softer than the others. 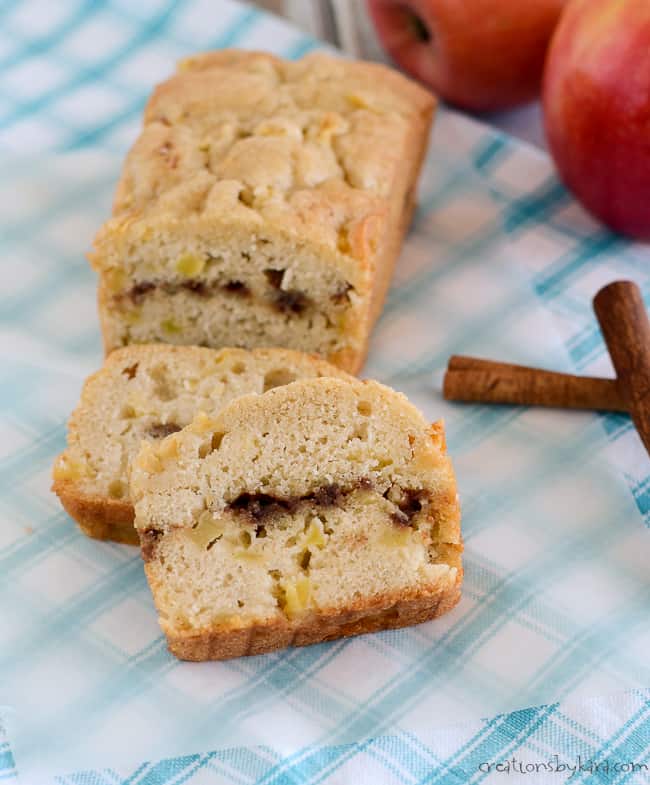 With all the chunks of apples, you need a pretty hearty loaf to support them. This cinnamon swirl bread has a texture similar to pound cake. The batter is stiff, which helps keep the apples from all sinking to the bottom of the pan.

If you are looking for a nice dense bread loaded with fresh apples and filled with cinnamon sugar, this recipe is for you! Want a more fluffy loaf without any apple chunks? Give my applesauce bread a try. 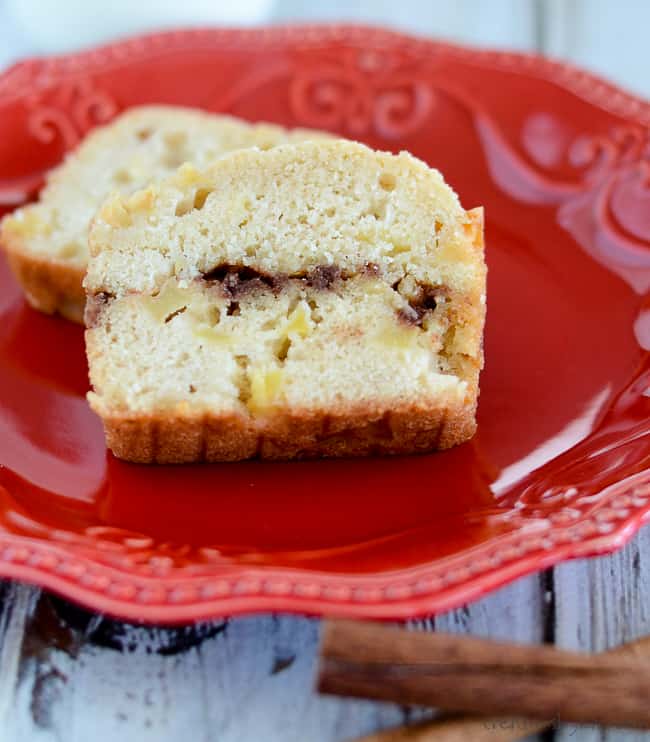 Apple quick bread actually gets more moist as it sits, due to the apple chunks. It’s best eaten after a day or two, or it can start to get soggy.

You get six mini loaves out of this recipe, so wrap up an extra loaf or two and share it with a friend.  You can of course wrap it up tightly and freeze it in ziplock bags, but sharing is better, don’t you agree? 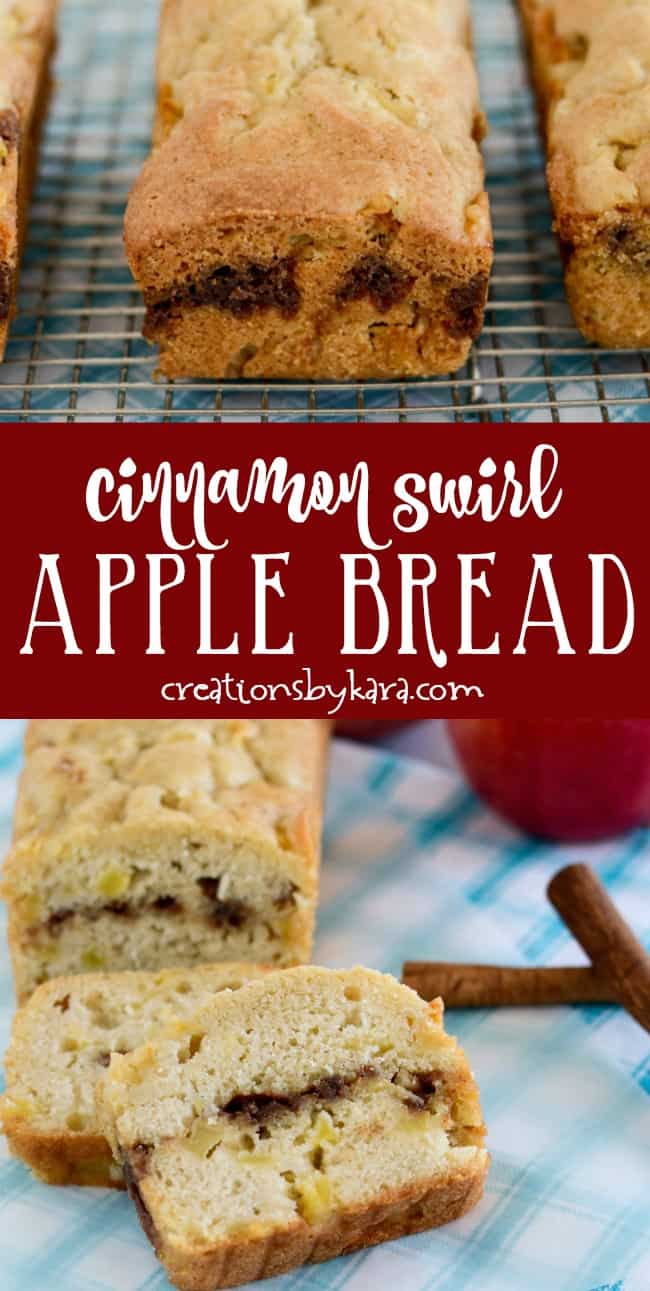 -A good peeler is a must for peeling all those apples. I love this peeler.
-Whisk : I have multiple whisks in all sizes. This is a good basic whisk set.

HERE’S A FEW MORE WAYS TO BAKE WITH TASTY APPLES: